Choose your Country or Region 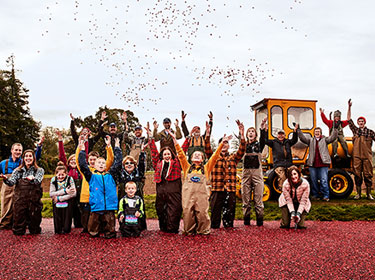 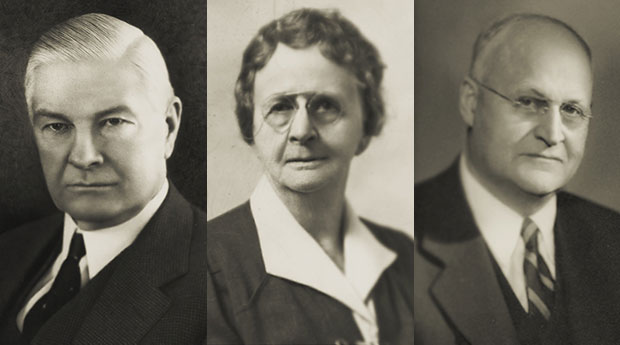 The Ocean Spray story starts in 1930 when three passionate, independent cranberry growers found the key to expanding the superfruit's success: a single cranberry-growing family! By coming together in one cooperative, Marcus Urann, John Makepeace and Elizabeth Lee worked together to create deliciously innovative products with the fruit they loved. The best part? They continued to grow their cranberry family along the way, which now includes over 700 grower families across North and South America! 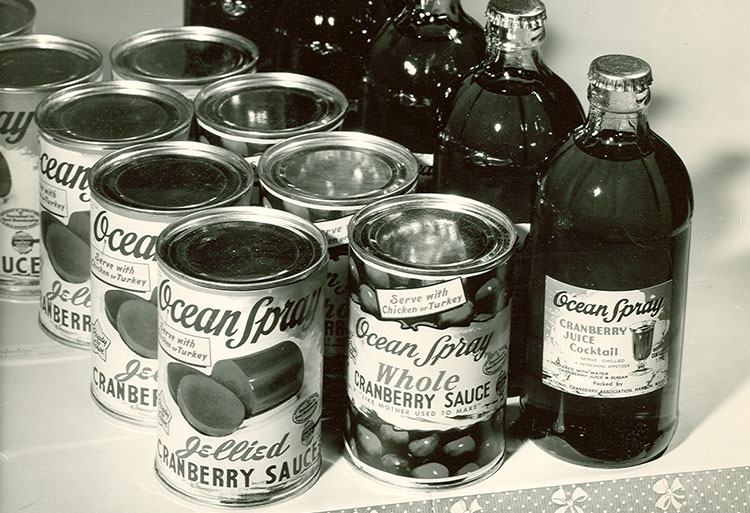 Once our three founders banded together and launched their first product - Jellied Cranberry Sauce - there was no stopping the Ocean Spray Cooperative. Growers from Wisconsin, Washington and Oregon quickly joined the cooperative, and within its first decade, Ocean Spray became the first producer of cranberry juice drinks! Our products were hitting store shelves from coast to coast, and as more years passed, more and more products were created. But to this day, the original Ocean Spray products remain our most popular: Ocean Spray® Jellied Cranberry Sauce and Ocean Spray® Cranberry Juice Cocktail. 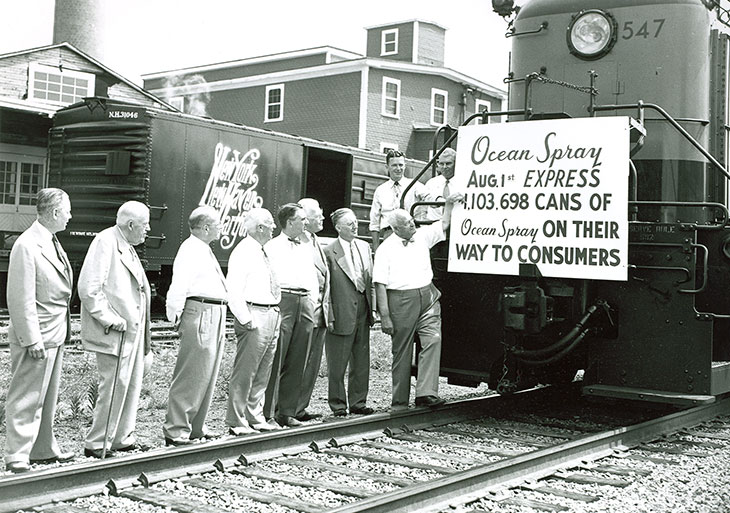 In the 1940s, Ocean Spray continued to flourish, adding facilities, plants, and new growers. The Cooperative also supported American troops during World War II by making sure cranberry products were available on the frontlines. The 1950s marked the beginnings of Ocean Spray’s operations in Canada, as well as the Cooperative’s first television advertising. In 1959, however, a serious problem confronted the cranberry industry when a pesticide scare lead stores to remove cranberry products from their shelves, restaurants to follow suit on their menus, and shoppers to skip buying cranberry sauce at the holidays. The resulting drop in sales nearly destroyed the entire cranberry industry, which at that time was still very much a seasonal business. 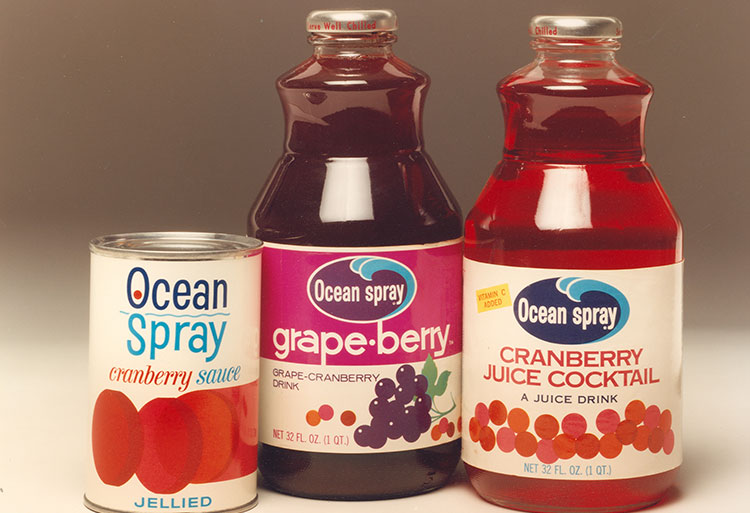 Over the next three decades, Ocean Spray revived the cranberry market and diversified its product lines to offer more stable, year-round sources of income for its Grower-Owners. During the 1960s, Ocean Spray reinvented the consumer beverage market, adding Cranapple® Cranberry Apple Juice Drink, the first juice blend, as well as our first reduced calorie juices. New products, modern business practices and refined harvesting techniques all led to increased sales, which broke the $100 million barrier in 1974. To keep up with this rapid growth, Ocean Spray built and opened several new receiving and processing facilities. The cooperative also expanded its membership to include Florida grapefruit growers in 1976. By the time Ocean Spray celebrated its 50th birthday in 1980, it surpassed $500 million in sales.

By the 1990s, Ocean Spray passed the billion dollar sales mark and relaunched dried cranberries, changing the dried fruit category forever. First introduced as a baking ingredient, dried cranberries were soon rebranded as Craisins® Dried Cranberries and marketed as a delicious snack. The cooperative also expanded the business overseas to France and Mexico, acquired CranChile and Atoka Cranberries in Quebec, and created dozens of new products including many new cranberry blends, healthy snacking items and more! Today, Ocean Spray is proud to be named as the leading producer of cranberries and one of the most successful cooperatives ever. 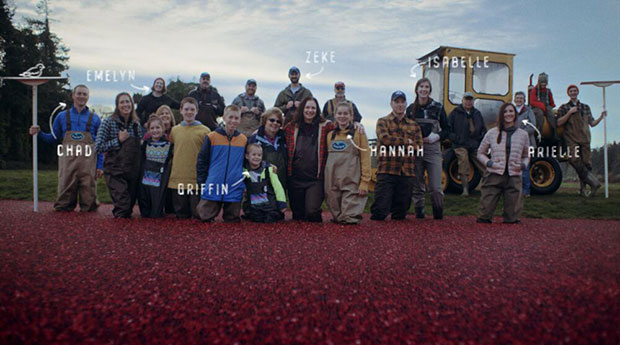 We believe tiny actions can make a mighty impact.

That’s why we do tiny things every day to care for our berries that care for you.

Because the 700 farmer families of Ocean Spray know acting tiny can be mighty.

We're farmer-owned, so we’re proud to deliver 100% of profits from our farmer-owners' fruit back to them. At Ocean Spray, our farmers have been putting their hearts into growing the fruit for generations. 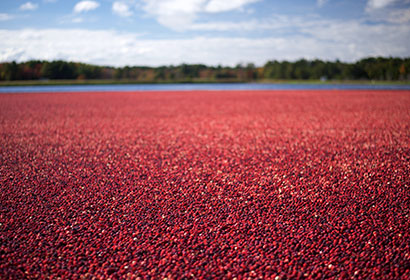 Every autumn, our cranberries reach their peak of color and flavor and are ready for harvesting. That's when our growers harvest millions of pounds of cranberries, deep in crimson color and bright with flavor. If you ask us, it's really quite beautiful.

For Eastern Indians, they were "sassamanesh.” Cape Cod Pequots and South Jersey Leni-Lenape tribes called them "ibimi," or bitter berry. And the Algonquins of Wisconsin dubbed the fruit "atoqua.” But it was the early German and Dutch settlers who started calling it the "crane berry” because of the flower’s resemblance to the head and bill of a crane. And finally, that was the name that stuck.

Contrary to popular belief, growing cranberries is a year-round affair. It starts with frost protection in the winter and into the spring and continues with pest management, weed control and bee pollination in the summer, with lots of important steps in between. In the fall, the berries reach their peak color and ripeness and are ready to be harvested. See what’s happening right now at our bogs located at our Headquarters in Lakeville, Massachusetts!

These cookies allow us to count visits and traffic sources so we can measure and improve the performance of our site. They help us to know which pages are the most and least popular and see how visitors move around the site. All information these cookies collect is aggregated and therefore anonymous. If you do not allow these cookies we will not know when you have visited our site, and will not be able to monitor its performance.